Celebrities Who Broke The Mould By Having Children Even After 40

Society has put a lot of restrictions on women with many being on what they wear, where they go and how they live their life. This needs to change as women have the same rights and freedoms as their male counter-part. But, society never ceases to pressurize them.

Case in point is the belief that women should not have babies after 40 especially if it is their first. In some countries, this age is even lower. But, there are many female celebrities who are standing up against that stereotype and proving that if women want, they can have their first child even after 40.

This actress has a massive number of Oscar nominations. However, most of her marriages ended. At the age of 41, while still in her third marriage (not her last), she gave birth to a daughter. Her daughter is Annie Starke, who is now all grown up and is also an actress now.

This actress became quite popular after starring in ‘National Lampoon’s Christmas Vacation’ and its 4 sequels. She was married to an Italian aristocrat, Don Lorenzo Salviati with whom she didn’t have any kids. Then she had a relationship with Al Pacino and became a mother for the first time. At age 49, she gave birth to twins, son Anton James and daughter Olivia Rose.

This British actress and scriptwriter is the winner of 2 Academy Awards. She became a mother for the first time at the age of 40 when she got married to her second husband Greg Wise, who she met on the sets of ‘Sense and Sensibility’. They had daughter Gaia and she had also adopted a former child soldier called Tindyebwa Agaba from Rwanda.

This popular actress has had two unsuccessful marriages. She had always wanted a baby and regretted that her marriages had failed. But one month before she turned 41, she got pregnant while still in her second marriage. At age 41, she gave birth to daughter Makena Lei Gordon. 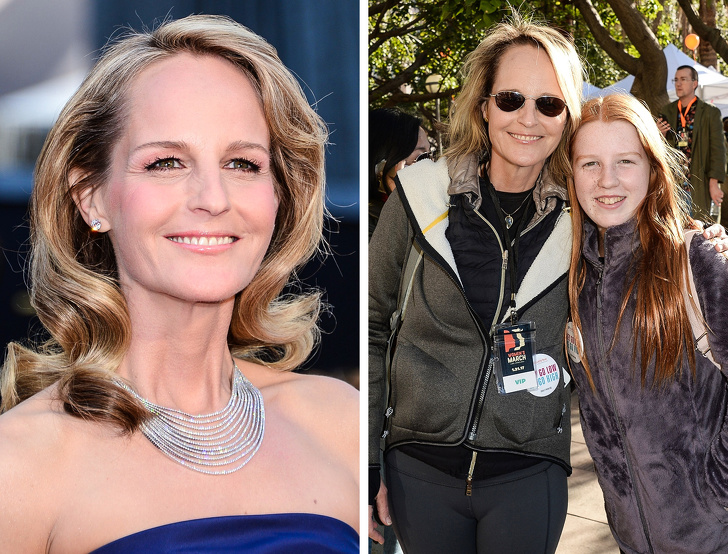 This actress has been married three times. Her marriages to a restaurateur, and then to actor and director Jeff Goldblum neither succeeded nor did she have any children. Her third marriage to plastic surgeon Reza Jarrahy gave her three children. She became a mother to daughter Alizeh Keshvar at age 46 and to twin boys Kallis and Kian at age 48.